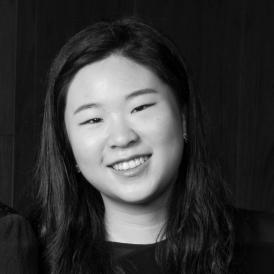 Born in Seoul (South Korea) in 1998. Since 2018, she studies at the Reina Sofía School of Music’s Fundación BBVA Viola Chair with professor Nobuko Imai. She has been granted a scholarship by Fundación Albéniz.
She started playing the viola at a young age and when she was 13, she entered the Yewon School of Arts where she graduated. She later completed a higher degree at the Yonsei University (South Korea) with professor Sang-jin Kim.
At the age of 12 she was winner of the Leopold Bellan International Music and Drama Competition (France, 2010) and in 2017 she was awarded third prize at the 15th Tokyo Music Competition, which led her to perform Hindemith‘s Der Schwanendreher Concerto for viola and orchestra with the Tokyo Philharmonic Orchestra. She has also won several prizes in her home country such as the Music Chun-Chu Award, Seoul’s National Philharmonic Award, and the Kumho Prodigy (2013) and the Yewon School of Art’s audition concerts.
She has participated in festivals, including Kronberg Academy (Germany, 2015 and 2017), Four Seasons Chamber Music (United States, 2016), where she performed with pianist Robert McDonald and violinist Ani Kavafian; Kronberg Chamber Music Connects the World (Germany, 2016), where she performed with Steven Isserlis, Christian Tetzlaff, and Antje Weithaas (Germany); Music Alp (Switzerland, 2017), where she performed with Nora Cismondi, Marianne Piketty, and Penny Driver; Seiji Ozawa International Academy (Switzerland, 2019) and Verbier Festival Academy (Switzerland, 2019). In 2022 she will participate at the Marlboro Music Festival (United States).
She has been soloist with the Gwangju Symphony Orchestra, the CBS Symphony Orchestra, and the Mostly Philharmonic Orchestra, in venues such as the Victoria Hall in Geneva (Switzerland), the Louis Vuitton Foundation (Paris), the Matsumoto Harmony Hall (Japan) with maestro Ozawa, and at the Arts Centre of Seoul with violinist Dong-Suk Kang.
As a student of the School, she has attended masterclasses by Lawrence Power and Tabea Zimmermann. She has been part of the Freixenet Symphony Orchestra, conducted by Péter Eötvös and Pablo González. She has been a member of the Casa de la Moneda Scarlatti Ensemble and is currently part of the BBDO Contrapunto Trio and Stadler Quintet.