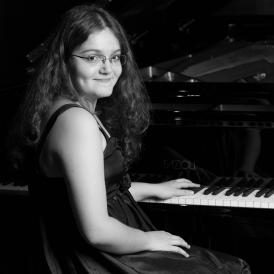 Born in Istanbul (Turkey) in 1999. Since 2013, she studies at the Reina Sofía School of Music Fundación Banco Santander Piano Chair with professor Dmitri Bashkirov. She has been granted tuition and accommodation scholarships by Yamaha Pianos and Fundación Albéniz. Her Majesty Queen Sofía handed her the Diploma to the most outstanding student of her chair in the 2016-2017 academic year.

She started playing piano at the age of eight with pianist Birsen Ulucan. She later entered the Denizatý Secondary School in Istanbul, where she studied for eight years. She has attended private classes by Birsen Ulucan as well as solfege and harmony lessons by composer Mehmet Nemutlu. She has also studied chamber and accompaniment music with violinist Ozcan Ulucan, one of Maxim Vengerov’s pupils. She has received masterclasses from Márta Gulyás, Yekaterina Lebedeva, Vanessa Latarche, Cristina Ortiz, Nikolai Demidenko, Menahem Pressler, Josep Colom, Siegfried Mauser, Luis Fernando Pérez, Dmitri Alexeev, Jerome Rose, Elisabeth Leonskaja, Eldar Nebolsin and Alexander Lonquich, as well as from Claudio Martínez Mehner, during the 2019 Santander Music and Academy Encounter.

In 2012 she was awarded first prize at the Young Pianists International Competition in Kosovo. She was also awarded at the Fahri Bekiri Festival, which led her to play Mozart’s Piano Concerto no. 9 with the Kosovo Philharmonic Orchestra in June 2013. She also obtained second prize and award to the best performance of a Turkish work at the Kamuran Gündemir National Competition in Mersin (Turkey). In 2015 she won first prize at the Hacettepe National Competition in Ankara (Turkey). She has given recitals in London after being awarded in several competitions and has performed at the National Auditorium of Madrid within the Generación Ascendente series of the Reina Sofía School of Music. She has also performed at the ABC Museum within the Entrenotas Cycle.

As a student of the School, she has been a member of the Sinfonietta under the baton of Baldur Brönnimann, that of the Freixenet Symphony Orchestra during the Santander Music and Academy Encounter, conducted by Péter Eötvös, and that of the Amadeus Ensemble. She is currently part of the Fundación Mahou San Miguel Trio, with whom she obtained the Mention to the most outstanding piano chamber group in the 2017-2018 academic year and was awarded first prize at the Ecoparque de Trasmiera International Competition in Arnuero. She is also part of the Asisa Óscar Esplá Quintet.