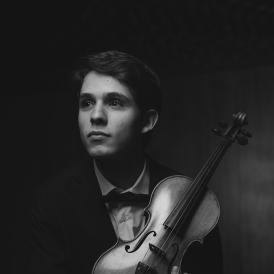 Born in Alcalá de Guadaira, Spain, in 1999. Since 2017, he studies at the Reina Sofía School of Music’s Telefónica Violin Chair with Professor Marco Rizzi. He has been granted scholarships by Friends of the Reina Sofía School of Music, AIE-Sociedad de Artistas, Intérpretes y Ejecutantes and Fundación Albéniz. He received the Diploma to the most outstanding student of his chair in the 2018-2019 and 2020-2021 academic years.

He started his violin studies in 2004 with Yuri Managadze and studied with Sergey Teslya from 2013 to 2017. He has attended masterclasses by Graf Mourja, Nicolas Dautricourt, and Ilya Kaler, as well as by Christoph Poppen, Miriam Fried, Alexander Lonquich, Ingolf Turban, Silvia Marcovici, Giovanni Guzzo, Linus Roth, and Ana Chumachenco at the Reina Sofía School of Music. He has been awarded first prize at the Violins for Peace Competition (2009), as well as first and special prize to the best performance of Sarasate at the Marcos Pedro Moreno Jiménez Competition (2010), and at the Jascha Heifetz Competition (Lithuania, 2021). That same year, he won the Prinz von Hessen-Preis, granted by the Kronberg Academy, and was awarded at the Joseph Joachim Competition.

He has participated in several national and international concerts and festivals, such as the Festival organised by the Spivakov Foundation in Moscow in 2010 (where he represented Spain), “Noches del Real Sitio” in 2015 (Spain), “Nocturnos de Cibeles” in 2016 (Madrid) and Ticino Musica 2016, where he was selected to perform in the closing ceremony concert, among others. He has also collaborated several times with the Joaquín Turina Chamber Music International Festival in Seville, where he has shared the stage with Sofya Melikyan, Simon Bernardini, and Silvia Simionescu. As a soloist, he has performed with the Seville Symphony Band under the baton of Francisco Javier Gutiérrez Juan, with whom he premiered in 2012 “The New Light”, a piece for violin, oboe and band, written by composer Antonio Moreno Pozo and dedicated to him and to oboist Francisco Javier Gutiérrez Jiménez. In 2017 he recorded his first CD along with the winners of the City of Seville Piano Competition (2016), playing Niccolò Paganini’s Caprice no. 4. In 2022 he performed as soloist with the Spanish National Orchestra under the baton of David Afkham, as well as with Madrid's Regional Orchestra and Choir conducted by Marzena Diakun.

As a student of the School, he performed as soloist with the Freixenet Symphony Orchestra, under the baton of Pablo González. He has also appeared with the Fundación EDP Camerata, as well as in the Rising Generation Series at Madrid's Auditorio Nacional. He has also been conducted by Plácido Domingo, Jaime Martín, Víctor Pablo Pérez, Andrés Orozco-Estrada, András Schiff, and Péter Eötvös.

In addition, he has been a member of the School’s Enagás Schumann, the Deloitte Mozart, and the Stravinsky ensembles, the Prosegur Albéniz Quartet and Ensemble, as well as the KPMG Schubert Quintet, with whom he was awarded the Mention to the most outstanding chamber group in the category of groups with piano in 2021.

He plays a Giovanni Battista Guadagnini instrument from 1765, loaned by Frizt Behrens Stiftung.