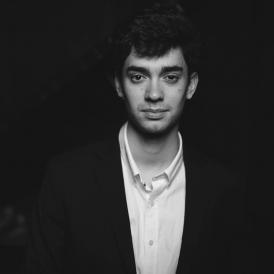 Born in Covilhã (Portugal) in 1996. Since 2017, he studies at the Reina Sofía School of Music’s Fundación Banco Santander Piano Chair with professor Galina Eguiazarova. He has been granted a scholarship by Fundación Albéniz. In 2020 he received the Diploma to the most outstanding student of his chair.

He started his piano studies at the age of 6 with Paula Ramos at the Associação Cultural da Beira Interior and afterwards with Tamara Antontseva at the Academia de Música e Dança do Fundão. In 2013 he entered the Lisbon School of Music, where he studied with Jorge Moyano until 2017. He has also attended masterclasses by Jerome Rose, Elisabeth Leonskaja, Eldar Nebolsin, Luis Fernando Pérez, and Rena Shereshevskaya.

He is a first-prize winner in competitions including Cidade do Fundão (2014), Santa Cecilia (2014), and Cidade de Almada (2015). In 2016 he won the first prize at the Prémio Jovens Músicos in the chamber music category with the Artium Trio, with whom he has performed in the main halls of Portugal and with whom he has been recorded for the national radio and television. He made his orchestral debut at the age of 12 in Ettelbruck (Luxembourg).

As a student of the School, he has been a member of the Cosan Ensemble and the Dvořák Ensemble and is currently part of the KPMG Schubert Ensemble, with whom he obtained in 2021 the Mention to the most outstanding chamber group in the groups with piano category.