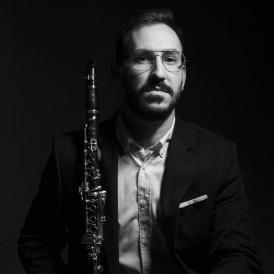 Born in Miranda do Corvo, Portugal, in 1993. Since 2019, he studies at the Reina Sofía School of Music’s Clarinet Chair with professor Pascal Moraguès. He has been granted scholarships by Fundação Calouste Gulbenkian and Fundación Albéniz.

At the age of ten, he began to study at the Coimbra Conservatory of Music with Paulo Vicente. He continued his training with Luis Carvalho at the Espinho Professional School of Music (2008-2011) and, between 2011 and 2018, he obtained a Bachelor's Degree at the Porto Higher School of Music and Performing Arts, as well as a Master’s Degree in performance with António Saiote.

He participated in masterclasses with Enrique Pérez Piquer, Florent Héau, Michel Arrignon, Pascal Moraguès, and Matthew Wilkie, among others.

In addition to the first prize of the International Clarinet Association – 2016 Young Artist Competition (Belgium), he has won in his home country first prize ex aequo at the 4th Paços Premium Competition in 2010, third prize ex aequo at the 4th Terras de La-Sallete National Competition, second prize at the 1st Terras de La-Sallete International Competition, and first prize at the Verão Clássico – Classical Summer 2018. He played as a soloist with the Espinho Classical Orchestra, conducted by Pedro Neves.

As a student of the School, she has been part of the Sinfonietta under the baton of Johannes Kalitzke, and he has performed at Segovia's Teatro Juan Bravo, as well as within the World Heritage Cities series in Segovia and Tarragona. He is a member of the Fundación Mutua Madrileña and Françaix ensembles as well as the O Globo Quintet.