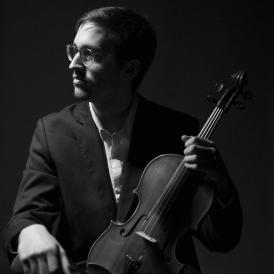 As violinist, he has been awarded second prize at the Llanes International Competition (Asturias). He has performed with the Adolfo Salazar and Musikene Symphony Orchestras. He has performed in halls such as Kutxa in San Sebastián and Fundación Juan March in Madrid. As a student of violin, he has been part of the KPMG Schubert Ensemble, the Stoneshield Quartet and the Freixenet Symphony Orchestra, conducted by Plácido Domingo, Peter Eötvös, Víctor Pablo Pérez, Andrés Orozco Estrada and Jaime Martín, as well as that of the Camerata of the School, conducted by Anne Sophie Mutter. As violist, he has been awarded first prize at the 18th Intercentros Melómano Competition (December 2019), organised by Fundación Orfeo.

As a student of the School, he is currently a member of the Prosegur Albéniz Quartet and Ensemble. He plays a Jacques Fustier viola, loaned by Fundación Albéniz.