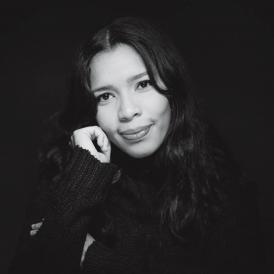 Born in Caracas (Venezuela) in 1992. Since 2018, she studies at the Reina Sofía School of Music’s Flute Chair with professor Jacques Zoon. She has been granted a scholarship by Fundación Albéniz. Her Majesty Queen Sofía handed her the Diploma to the most outstanding student of her chair in the 2018-2019 academic year.
She graduated from the Conservatory of Lyon and specialised in orchestra at the Geneva School of Music.
At the age of 15, she was awarded first prize at the National Wind Instruments Festival in Caracas. In 2010 she was also awarded first prize at the Yamaha Flute Competition. In 2015 and 2016 she was finalist at the Prague, Munich, and Riddes (Switzerland) competitions. In 2017 she was awarded first prize at the Riddes and Murten flute competitions and became finalist in other competitions in Napoca (Romania) and Dusseldorf (Germany). In 2018 she obtained the first prize at the Goehner Music Prize of the Kiefer Hablitzel Foundation and in 2019 second prize at Moscow’s Tchaikovsky International Competition.
As a student of the School, she has attended masterclasses by Emmanuel Pahud and Andrea Lieberknecht, and has participated within the cycles "Fundación Juan March", AIE cycle "Ruta Clásicos" which led her to perform in Badajoz, at the Lázaro Galdiano Museum and at Seville's Cicus Auditorium, as well as within the "Generación Ascendente" cyle, performing at the National Auditorium.
She has also been a member of the Freixenet Symphony Orchestra, conducted by Péter Eötvös. She has also been part of the Barroco Ensemble and is currently a member of the Banco Activo Universal Esferas and the Gounod ensembles.