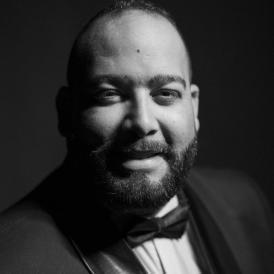 Born in Caracas, Venezuela, in 1986. Since 2019, he studies at the Reina Sofía School of Music’s Fundación Ramón Areces “Alfredo Kraus” Voice Chair, currently with professor Susan Bullock CBE. He has been granted scholarships by Juan Carlos Escotet Rodríguez (ABANCA) and Fundación Albéniz.

He has attended masterclasses by Konrad Jarnot and Francisco Araiza. He is a lyric tenor who has worked at the Teatro Nacional Sucre and has given classes at the Mozart and Franz Liszt conservatories, as well as at the Universidad de las Américas in Quito. He has been a member of the Conclave Choir and that of the Tenori vocal ensemble. He has been soloist of Beethoven’s Ninth Symphony along with the Loja Symphony Orchestra, conducted by Andrea Vela. In 2018 he made his debut as Sharpless in the “Madame Butterfly” opera and he was tenor soloist of Mozart’s Réquiem with the National Symphony of Ecuador at the Teatro Nacional Sucre. He has participated in the “Pagliacci” opera at the Teatro Bolívar (Venezuela, 2017), performing works of vocal technique, performance, and style, as well as performing one of the roles of Contadino, conducted by Ángeles Terreros.

He has been part of the Simón Bolívar Youth National Choir in Venezuela, with whom he performed at the Gulbenkian Theatre in Lisbon; the Notre-Dame and the Nantes cathedrals, as well as the Palace of Versailles in France, among others. He has been a member of “La Bohème” within El Sistema at the Teatro Alla Scala in Milan (Italy), in addition to offering opera, choral concerts and a capella music at the Cathedral of Milan and the San Marco Church. He has also sung Zoltán Kodály’s mass as tenor soloist, conducted by Vincent Heizter.

He has participated at the Royal Festival Hall in London, the Chorfest in Frankfurt, which included concerts at the Alte Oper and other German cities. He also performed Gustav Mahler’s Eighth Symphony at the Salzburg Festival along with the Simón Bolívar Symphony Orchestra, under the baton of Gustavo Dudamel.

As a student of the School, he has performed at Cáceres' Gran Teatro and within the World Heritage Cities series in Ibiza. He has been a member of the Fundación Orange Voces Tempo Ensemble.