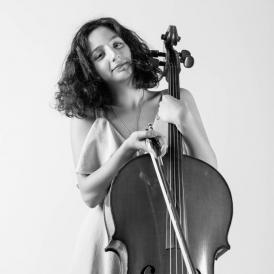 She began studying cello at the age of seven at the Paliashvili School of Music with Tamara Gabarashvili and furthered her training at the Preparatory School of Kronberg Academy with Frans Helmerson. Later, she studied at the Haute Ecole de Musique de Geneve-Neuchatel. She has attended masterclasses by Menahem Pressler, Torleif Thedéen, and Alexander Lonquich. She has been awarded first prize and the Golden Nutcracker at the Nutcracker International TV Competition in Russia and the grand prize at the Renaissance International Competition in Armenia. She has also won the national final of the Eurovision Young Musicians Competition and has participated in the international final. In 2017 she received the Zhvania Tsinandali Award for Young Scientists and Artists, as well as the Rostropovich, Miaskovki, and Boris Pergamenschikov full scholarships. In 2013 she made her U.S. debut and three years later, she returned to perform at Carnegie Hall. She was recently broadcasted live while performing a concert at Berlin’s Konzerthaus. She has participated in several festivals including Musica Mundi, Young Euroclassic Festival, Kronberg Academy Festival, Energy for Life, Arpeggione, and Gstaad’s Sommets Musicaux, among others. Additionally, she has performed with orchestras such as the Royal Philharmonic of Galicia, Arpeggione Hohenems Chamber Orchestra, Georgian State Opera Orchestra, National Chamber Orchestra of Armenia, National Symphony Orchestra of Azerbaijan, Novaya Rossiya State Symphony Orchestra, and Tchaikovsky Symphony Orchestra, under the baton of maestros including Yuri Bashmet, Benjamin Shwartz, Kazuki Yamada, and Saulius Sondeckis.

As a student of the School, she has been part of the Freixenet Symphony Orchestra, conducted by Jaime Martín. She has also been a member of the Deloitte Mozart Trio, the Sibelius Ensemble and that of the Dvořák Quartet.