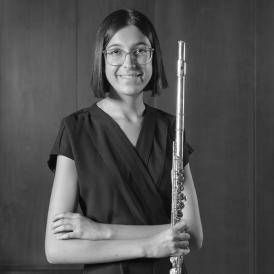 Born in Lisbon, Portugal, in 2003. Since 2022, she studies at the Reina Sofia School of Music’s Flute Chair with professor Jacques Zoon. She has been granted scholarships by Fundação Calouste Gulbenkian and Fundación Albéniz.

She started playing the recorder at the age of five and the transverse flute when she was eight. She started her flute studies at the age of nine in the Escola Artística de Música do Conservatório Nacional in Lisbon with Solange Silva. She has also attended masterclasses with Andrea Lieberknecht, Silvia Careddu, Adriana Ferreira, Alja Velkaverh, Sophie Perrier, Francisco Barbosa, Ana Ferraz, Katherine Rawdon and Gil Magalhães.

She had a flute, violin, and piano trio that won the 2022 International Music Competition “London Grand Prize Virtuoso” in the chamber music Group C, so she had the opportunity to play in the Elgar Room of the Royal Albert Hall in London. Also in 2022, she won the first prize in the Jovem. COM competition, a competition between the public music schools all over Portugal, and had the chance to play Mozart's Flute Concerto in G Major with an orchestra; and won the First Prize in the 5th National Competition Cultivarte Jovem 2022.

As a student of the School, she is a member of the Fundación Mutua Madrileña Ensemble.