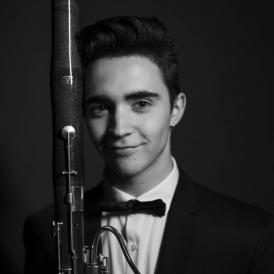 Born in Pozuelo de Alarcón, Spain, in 2001. Since 2019, he studies at the Reina Sofía School of Music’s Basoon Chair with professor Gustavo Núñez. He has been granted a scholarship by Fundación Albéniz.

He started his studies at the Amaniel Professional Conservatory of Music with professor Dominique Deguines. During this period, he completed the courses with Honours and performed as soloist with the Chamber Orchestra and the Symphony Orchestra. He has attended courses and masterclasses by Rie Koyama, Guillaume Santana, Higinio Arrue, Javier Aragó, David Tomás, Enrique Abargues, Eduardo Alaminos, Matthew Wilkie, and Joan Enric Lluna.

He has been awarded several prizes at the IES Cardenal Cisneros Competition, the 8th Chamber Music Competition of Ávila, and at the Amaniel Conservatory Competition. In 2019 he was awarded the Extraordinary Prize of Music of the Community of Madrid and in July 2021 the second prize and the audience award at the National Bassoon Competition of the Spanish Association of Bassoonists and Oboists, which took place in Málaga.

In 2017 he entered Madrid’s Youth Orchestra and Choir. He has also been part of the Symphony Orchestra at the World Youth Day and that of Pozuelo’s Musical Union, band with whom he performed as soloist.

As a student of the School, he has performed within the World Heritage Cities series in Cuenca and Córdoba. He has been part of the Cosan Ensemble and is currently a member of the Fundación Mutua Madrileña Ensemble, the Poulenc Trio, and the EY Ricercata Quintet.