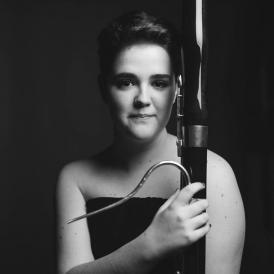 Born in Torre del Campo, Spain, in 1999. Since 2017, she studies at the Reina Sofía School of Music’s Bassoon Chair with professor Gustavo Núñez. She has been granted scholarships by Merlin Properties and Fundación Albéniz. In 2020 she received the Diploma to the most outstanding student of her chair.

She studied for ten years at the Ramón Garay Professional Conservatory in Jaén with Juan Ramón Fuentes Ferrer. She has attended improvement courses by Gustavo Núñez, Marco Postinghel, Mor Biron, Enrique Abargues, Klaus Thunemann, Akio Koyama, Javier Aragó, and David Tomás, as well as masterclasses by Gilbert Audin, Jonathan Kelly, Matthew Wilkie, and Joan Enric Lluna. From 2013 to 2015 she studied at the Baremboim-Said Foundation’s School of Orchestral Studies with Javier Aragó. She has been awarded first prize in the regional phase of Andalucía at the Intercentros Melómano Competition (2016) and third prize at the 2nd Afoes National Bassoon Competition (2017). She has been part of the Youth Orchestra of Andalucía, 2016 Proyecto Talentos of Madrid’s Symphony Orchestra, and Youth Academy of Granada’s Orchestra. She has performed under the baton of Rubén Gimeno, Álvaro Albiach, Michael Thomas, Manuel Hernández Silva, Domingo Hindoyán, and Joseph Swensen.

As a student of the School, she has been a member of the Freixenet Symphony Orchestra, conducted by Péter Eötvös, Jaime Martín, Sir András Schiff, and Pablo Heras-Casado, and that of the Sinfonietta, under the baton of Jorge Rotter and Baldur Brönnimann. In 2021 she participated in the 30th anniversary tour of the School with the Freixenet Symphony Orchestra, conducted by Andrés Orozco-Estrada, with whom she performed at Madrid's Teatro Real, at Bratislava's Reduta Hall, at Budapest's Liszt Ferenc Academy and at Vienna's Musikverein. She has also been part of the Harmonie, Stravinsky and Beethoven ensembles and the EY Ricercata Quintet. She is currently a member of the Esferas and the Françaix ensembles.