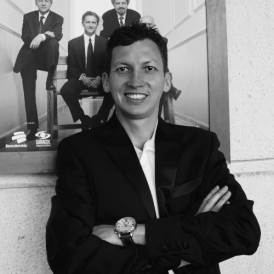 Born in Bogotá (Colombia) in 1985. He lived and studied in Havana (Cuba) from 2002 to 2015. Since 2020, he studies at the Reina Sofía School of Music’s IF International Foundation Composition Chair with professor Fabián Panisello. He has been granted scholarships by Fundación Santo Domingo and Fundación Albéniz.
Composer, conductor, pianist, editor, pedagogue, and documentalist, since 2009, he leads Fundación Colarte Café in his hometown and is a member of the editorial team of the digital newsletter of the Gabinete Musical Esteban Salas: the Sincopado Habanero (Cuba). He has taught at the National School of Arts in Cuba, at the National Pedagogical University of Colombia, and at the INCCA University of Colombia. He is also editor and copyst of Cuban composers Alfredo Diez Nieto and Leo Brouwer.
He has been awarded first prize at the International Musicalia Competition of the ISA University of Arts (2008, Cuba), special prize at the Harold Gramatges Competition of the UNEAC (2012), 160 José Martí ISA prize (2015, Cuba), first prize at the first FESTIQ-ARTETOS national competition (2018, Colombia), special CUBADISCO prize (2018, Cuba), second prize at the Alfred Schnittke International Composers´ Competition (2018, Ukraine), shared first prize at the Ensemble ECO Competition (2019, Costa Rica), and third prize at the 8SW Composer Competition (2020, United States).