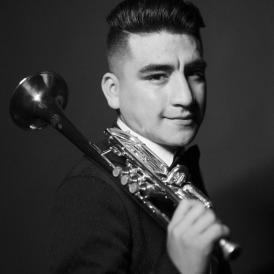 Born in Cuaspud, Colombia, in 1995. Since 2019, he studies at the Reina Sofía School of Music’s IF International Foundation Trumpet Chair, led by professor Reinhold Friedrich. He has been granted scholarships by Fundación Santo Domingo and Fundación Albéniz. In 2019-2020 he was granted a scolarship by Filarmónica Joven de Colombia - Fundación Bolívar Davivienda and Fundación Carolina Colombia. Her Majesty Queen Sofia Handed him that Diploma to the most outstanding student of his chair in the 2021-2022 academic year.

He began his musical studies at the age of 13 in the Julio Arboleda Band of his hometown. He completed his undergraduate studies at the University of Caldas (Colombia) with Óscar Fernando Trujillo, where he obtained the Master’s Degree in Music. In addition, he has participated in workshops and masterclasses with professors such as Juan Fernando Avendaño, Mark Hugues, Philippe Litzler, Florian Kirner, Ole Edvard Antonsen, and Håkan Hardenberger (trumpet and wind ensembles), among others.

In 2017 he was a finalist in the Second Eric Aubier Latin American Trumpet Competition, held in the city of Bogotá. During the same year, he was also a finalist in the National Competition organised by the Colombian Trumpet Academy.
He has been a member of the Youth Symphonic Orchestra of the University of Quindío, the Municipal Band of Manizales, the Caldas Symphonic Orchestra, and the Colombian Youth Philharmonic.

As a student of the School, he has been a member of the Freixenet Symphony Orchestra, conducted by Pablo González and Pablo Heras-Casado and within Spain's World Heritage Cities Chamber Music series (Cáceres). In 2021 he participated in the 30th anniversary tour of the School with the Freixenet Symphony Orchestra, conducted by Andrés Orozco-Estrada, with whom he performed at Madrid's Teatro Real, at Bratislava's Reduta Hall, at Budapest's Liszt Ferenc Academy and at Vienna's Musikverein. He has also been part of the Trumpet Quartet and the Françaix Ensemble. He is currently a member of the Fundación Mutua Madrileña Ensemble and the Skalkottas Quartet.