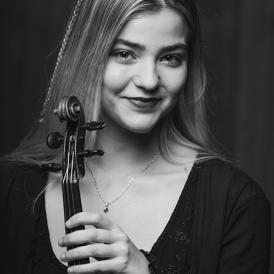 Born in Madrid, Spain, in 2003 within a family of musicians. Since 2021, she studies at the Reina Sofía School of Music’s Telefónica Violin Chair with professor Zakhar Bron. She has been granted scholarships by Consejería de Educación, Universidades y Ciencia de la Comunidad de Madrid and Fundación Albéniz.

She began her violin studies at the age of 8 with Anna Baget at the Adolfo Salazar Music Conservatory, where she graduated with the highest qualifications.

In 2018, she was among the five violinists that were selected at the national level to participate through a scholarship in the masterclasses offered in Madrid by violinist Sarah Chang.
In 2019, she was selected to attend the Aurora Music Festival in Stockholm, where, as part of the orchestra, she performed with Leonidas Kavakos under the baton of Jukka Pekka Saraste. At the same time, she also atended masterclasses by Maestros Alisa Margullis and Eszter Hafner.

She was a member of the Adolfo Salazar violin Ensemble, conducted by Maestro Anna Baget and has also had the opportunity to give concerts both as part of an ensemble and as soloist in Spain, Greece, Serbia and Sweden.

As a student of the School, she has performed with the Fundación EDP Camerata, conducted by Paul Goodwin. In 2021 she participated in the 30th anniversary tour of the School with the Freixenet Symphony Orchestra, conducted by Andrés Orozco-Estrada, with whom she performed at Madrid's Teatro Real, at Bratislava's Reduta Hall, at Budapest's Liszt Ferenc Academy and at Vienna's Musikverein. She is a member of the Fundación Mahou San Miguel Trio.