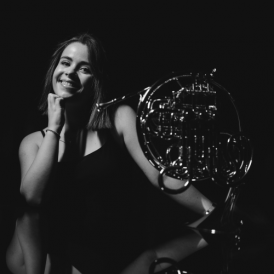 Born in Calahorra, Spain, in 1998. Since 2020, she studies at the Reina Sofía School of Music’s Fundación ”la Caixa” Horn Chair with professor Radovan Vlatković. She has been granted scholarships by Fundación Mª Cristina Masaveu Peterson and Fundación Albéniz.

She completed her first music studies at the Maestro Arroyo Music School. She combined her academic education with music studies at Calahorra’s Professional Conservatory of Music. She has attended masterclasses by Eric Terwilliger, Willy Bessems, Jorge Rentería, Marie Luise Neunecker, David Cooper, Stefan Dohr, Sarah Willis, and David Bushnell, and has participated in encounters with Manuel A. Fernández and Gustavo Castro.

In 2021 she won a position in the National Youth Orchestra and entered the labour exchange of the Extremadura Orchestra.

In 2019 she was awarded a prize for her performance as soloist within Musikene’s Orchestral Studies programme.

As a student of the School, she was part of the Freixenet Symphony Orchestra, conducted by Pablo Heras-Casado, and that of the Sinfonietta, conducted by Baldur Brönnimann. In 2021 she participated in the 30th anniversary tour of the School with the Freixenet Symphony Orchestra, conducted by Andrés Orozco-Estrada, with whom she performed at Madrid's Teatro Real, at Bratislava's Reduta Hall, at Budapest's Liszt Ferenc Academy and at Vienna's Musikverein.
She has also been a member of the Gounod Ensemble and is currently part of the Zéphyros Quintet and Sextet.