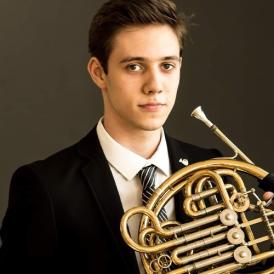 Born in Budapest, Hungary, in 2002. Coming from a cellist family, he started to play such instrument even though he later chose the horn. He studied with professor Tibor Maruzsa at the Saint Stephan King Conservatory. He has been awarded Brass of the Year Prize in 2017 and 2018, as well as first prizes at the High School National Horn Competition, third category (in which he was also awarded a special prize), the International Horn Competition of Trossingen (Germany), 43 Brass and Percussion Competition in Debrecen (Hungary), as well as an Honorary Mention at the Leos Janacek International Horn Competition in Brno (Czech Republic). In addition, in February 2022 he has passed an audition for the Hungarian Radio Symphony Orchestra.