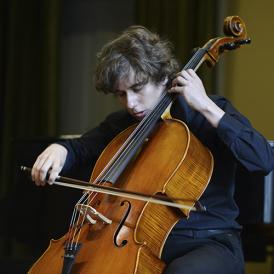 Born in Budapest, Hungary, in 1997. He studied at the Ferenc Liszt Academy in Budapest with Miklos Perenyi, Márta Gulyás, Rita Wagner, and Janos Rolla; and in Saarbruecken, Germany, where he studied for a year in Erasmus with Gustav Rivinius. Winner of several international competitions in Hungary, Slovakia, Austria, and Croatia, he has won the Junior Prima Award (2018) and was awarded the Annie Fischer scholarship (2019 and 2021). He has been part of the Enghien International Musical Encounters, Allegro Vivo Festival, Wiener Meisterklasse, International Holland Music Sessions, and Seminario Bartók. He has also played in numerous concerts with Márta Gulyás and has performed as soloist with the orchestras of the Budapest Festival, Ferenc Liszt Chamber Orchestra, Zuglo Filharmonics and Eger Filharmonic. Since 2021, he is principal cello at the MAV Symphony Orchestra in Budapest.