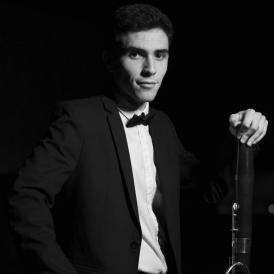 Born in Murcia (Spain) in 1999. Since 2019, he studies at the Reina Sofía School of Music’s Bassoon Chair with professor Gustavo Núñez. He has been granted a scholarship by Fundación Albéniz.
He completed his professional training with Honours and prize of end-of-degree at Murcia’s Conservatory of Music and later entered the Victoria Eugenia Royal Conservatory in Granada with Lucía Molina.
He has attended masterclasses by Matthias Rácz, Guilhaume Santana, Akio Koyama, Michael Hasel, Stanley Dodds, Michael Gieler, and Miriam Pastor. He was selected by the Berliner Philharmoniker to participate in the BE PHIL Orchestra educational project under the baton of Sir Simon Rattle.
He has been granted the 2017 Iberpiano music scholarships and has been awarded second prize at the Entre Cuerdas y Metales Competition, as well as second prize at the Young Performers Competition of Murcia’s Conservatory.
He has given recitals as soloist, organised by Juventudes Musicales of Guadalentín, Iberpiano, and Murcia’s Museums, among others.
He has collaborated with orchestras, including the Symphony Orchestra of Murcia’s Catholic University, Murcia’s Youth Orchestra, and Alicante’s Youth Orchestra, as well as with maestros Josep Vicent, Roque Baños, and Borja Quintas.
As a student of the School, he has been a member of the Poulenc Ensemble and he is currently part of the EY Ricercata Quintet, as well as that of the Barroco, Gounod, and Fundación Mutua Madrileña ensembles.