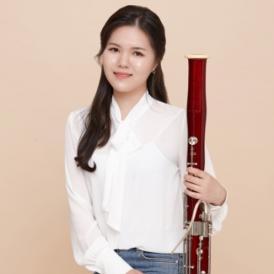 Born in Seoul (Korea) in 1994. She studied a bachelor’s degree at the Seoul Nationa University of College of Music and later completed two master’s degrees in performance at Zurich’s School of Music. She has been awarded third prize and audience award at the Muri International Competition (2019) and first prize at the 57th Dong-a Music Competition, at the 30th Busan MBC Public Broadcast Music Competition and at the 33rd Music Association of Korea, in addition to the grand prize at the Busan Metropolitan City of Korea (2013) and the Young Sylvia Prize in the Artsylvia chamber music audition. Furthermore, she has performed at the Gumho Art Hall as a “Young Artist” of Gumho Asiana Cultural Foundation. From 2008 to 2016 she was principal bassoon at the Yongin Youth Philharmonic Orchestra.