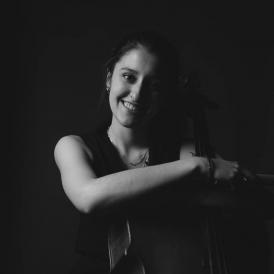 Born in Toledo, Spain, in 1997. Since 2017, she studies at the Reina Sofía School of Music’s Aline Foriel-Destezet Cello Chair with Professor Ivan Monighetti, having received the Diploma to the most outstanding student of his chair in 2021. She has been granted scholarships by Fundación Altamar and Fundación Albéniz and instrument scholarships by Fundación Málaga and Instituto Internacional de Música de Cámara de Madrid.

She has performed in venues such as Fundación Juan March, National Auditorium, Monumental Theatre and Sony Auditorium, among others. She has also participated in festivals, including the Santander Music and Academy Encounter and the San Sebastián Musical Fortnight.

As a student of the School, she has been part of the Freixenet Symphony Orchestra, conducted by Víctor Pablo Pérez, Plácido Domingo, Andrés Orozco-Estrada, Péter Csaba, Pablo González, Pablo Heras-Casado and David Afkham, and that of the Sinfonietta, under the baton of Jorge Rotter and Johannes Kalitzke. She has performed within the World Heritage Cities series in Alcalá de Henares and Ávila. In 2021 she participated in the 30th anniversary tour of the School with the Freixenet Symphony Orchestra, conducted by Andrés Orozco-Estrada, with whom she performed at Madrid's Teatro Real, at Bratislava's Reduta Hall, at Budapest's Liszt Ferenc Academy and at Vienna's Musikverein.
She has also been a member of the Google Da Vinci, Wanderer, Schola and Beethoven ensembles. She is currently part of the Asisa Óscar Esplá Quartet, with whom she was awarded the 2019 and 2020 Mention to the most outstanding chamber group in the string category, as well as the 2019 EMCY Prize at the 2019 Young Musicians of Spain Competition in the chamber music category.