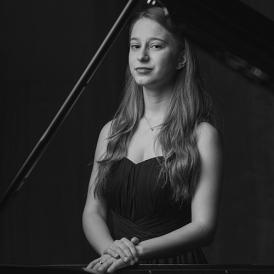 Born in Prague, Czech Republic, in 1999. Since 2020, she studied at the Reina Sofía School of Music’s Fundación Banco Santander Piano Chair with professor Dmitri Bashkirov and with professor Milana Chernyavska since the 2021-2022 academic year. She has been granted a scholarship by Fundación Albéniz.

She started playing the piano at the age of five. She studied at the School of Music in Prague and has a Master’s degree from the University of Fine Arts of the same city. She has attended masterclasses by Stanislav Ioudenitch and Rena Shereshevskaya, among others.

In October 2015 she became one of the youngest pianists in history to participate in the Chopin Piano Competition in Warsaw (Poland) at the age of 16. She has an active artistic agenda, having also performed in recitals in Europe, United States, South America, and Asia before large audiences. In November 2019 she recorded her first CD.

As a student of the School, she has performed at the Palacio del Condestable within the Pamplona Acción Musical series, as well as in San Cristóbal de la Laguna within the World Heritage Cities series. She has been a member of the Enagás Schumann Trio and is currently part of the Google Da Vinci Ensemble.