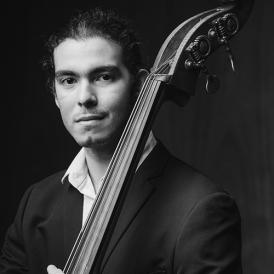 Born in Lisbon, Portugal, in 1999. Since 2021, he studies at the Reina Sofía School of Music’s Unidad Editorial Double Bass Chair with professor Duncan McTier. He has been granted scholarships by Banco Santander Portugal and Fundación Albéniz.

He began his music studies at the age of 5, he started playing the double bass at 8, and at 11 he entered the National Conservatory of Portugal. He finished high school in 2017 at Lisbon’s Metropolitan Professional School, where he was awarded the Jovem Solista EPM Award and played as soloist with Lisbon’s Metropolitan Classical Orchestra. He furthered his studies at Lisbon’s School of Music with Manuel Rêgo and Domingos Ribeiro. He has also attended masterclasses by Alain Posch, among others

In 2017 he won the first prize at the Vasco Barbosa National String Competition, where he performed as soloist with the Camerata Atlântica.

As a student of the School, he has performed with the Fundación EDP Camerata, conducted by Paul Goodwin, and he is currently a member of the Unidad Editorial Dittersdorf Double Bass Quartet.