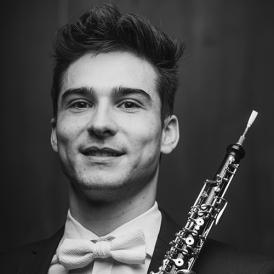 Born in Alfarp, Spain, in 1995. Since 2020, he studies at the Reina Sofía School of Music’s Oboe Chair with professor Hansjörg Schellenberger. He has been granted scholarships by Fundación Banco Sabadell and Fundación Albéniz.

He began his music studies at the SPM La Lira de Alfarp Music School with professor Rodrigo García. He continued the professional degree at the Perfecto García Chornet Conservatory in Carlet with Alejandro Espí, where he obtained the end-of-degree prize. In 2018 he studied the higher degree at the Conservatory of Music in Valencia with Vicente Llimerà, graduating with Honours in his modality, as well as with the extraordinary prize of end-of-degree.

He collaborated with the Local Band of Valencia in 2016 and 2017, as well as with the RTVE Orchestra in 2018 and 2019. He is also a member of the Youth Orchestra of the Community of Madrid.

As a student of the School, he has been part of the Freixenet Symphony Orchestra, conducted by David Afkham, as well as that of the Sinfonietta under the baton of Baldur Brönnimann. In 2021 he participated in the 30th anniversary tour of the School with the Freixenet Symphony Orchestra, conducted by Andrés Orozco-Estrada, with whom he performed at Madrid's Teatro Real, at Bratislava's Reduta Hall, at Budapest's Liszt Ferenc Academy and at Vienna's Musikverein. He is currently part of the EY Ricercata Quintet and the Telemann Ensemble.