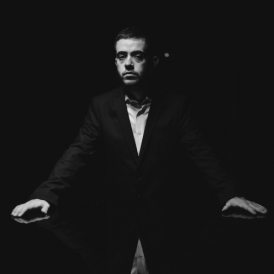 Born in Ciudad Real (Spain) in 2000. Since 2020, he studies at the Reina Sofía School of Music’s IF International Foundation Composition Chair with professor Fabián Panisello. He has been granted a scholarship by Fundación Albéniz.
He has attended improvement classes and tuba masterclasses by professors Manuel Dávila, Juan José Munera, David Abellán, Sergio Rey, Patricio Consentino, Daniel Férriz, Pep Burguera, and Steven Mead, among others.
Regarding composition, he has attended masterclasses by composers Kaija Saariaho, Raphäel Cendo, Ramón Lazkano, Hèctor Parra, and Daniel D’Adamo.
He has performed as soloist with the bands of Carrión de Calatrava, Badajoz, Manzanares, and with the Musicians Without Borders band from Valencia, in auditoriums such as the Teatro López de Ayala in Badajoz and the Palau de la Música in Valencia. He has also been a member of the Contrabass Tuba Quartet.
He has also performed as a guest artist in the Sbalz Alzira Brass Festival in Valencia, organised by Spanish Brass Luur Metalls in 2017. In that year he won the extraordinary music prize (Tuba category), granted by the Regional Government of Castilla la Mancha.