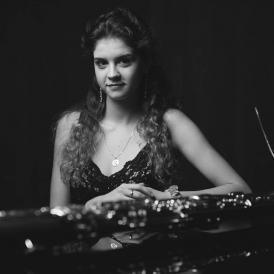 Born in Salamanca (Spain) in 1999. Since 2017, she studies at the Reina Sofía School of Music’s Bassoon Chair with professor Gustavo Núñez. She has been granted tuition and accommodation scholarships by Fundación Albéniz.

She started her music education at the Conservatory of Salamanca with Vicente Moros Portolés, graduating in 2017 with the highest qualifications and with whose orchestra she made her debut as soloist, performing Vivaldi’s Concerto for bassoon in A minor KV 498, under the baton of Andrés Balaguer and with the collaboration of Pedro San Martín. She has attended several orchestra and chamber courses, including the youth orchestra course of the Fundación Princesa de Asturias in 2014, taught by Yuri Nasushkin, as well as the Intercultural Youth Orchestral Exchange (BISYOC) in 2016 with conductor Julian Gibbons. As a student of the Reina Sofía School of Music, she has attended masterclasses by Gilbert Audin, Pirmin Grehl and Jonathan Kelly, in addition to having been advised by Klaus Thunemann. In 2015 she collaborated on a charity concert with the Leukemia and Blood Disease Association along with the Youth Orchestra of León, conducted by Francisco Valero Terribas. In 2019 she was awarded special prize at the 4th Manhattan International Music Competition.

As a student of the School, she has been a member of the Freixenet Symphony Orchestra, under the baton of Jaime Martín, as well as that of the Harmonie Ensemble and the Cosan Quintet. She is currently part of the O Globo and the Fundación Mutua Madrileña ensembles.