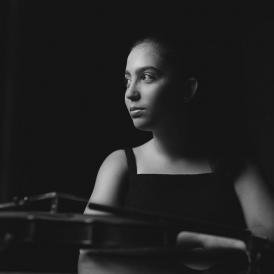 Born in Madrid, Spain, in 2002. Since 2017, she studies at the Reina Sofía School of Music’s Telefónica Violin Chair with professor Zakhar Bron. She has been granted scholarships by Consejería de Educación, Universidades y Ciencia de la Comunidad de Madrid and Fundación Albéniz.

She studied at the Padre Soler Integrated Center of Music with Fernando Rius and from 2013 to 2017 she worked with Olga Vilkomirskaia. She has attended masterclasses by Miriam Fried, Lutsia Ibragimova, Ilgolf Turban, Silvia Marcovici, Christoph Poppen, Linus Roth and Ralf Gothóni (groups with piano), and has attended courses of music performance and improvement at the Mozarteum in Salzburg, the Katarina Gurska Foundation, and the Presjovem International Festival in Córdoba. She has been awarded prizes in national and international competitions, including Violins for Peace in Málaga (2015), City of Vigo (2016 and 2018), the Mundi Awards, and the Kocian in Czech Republic (2018). She has also been recorded in radio and television programmes.

She performed as soloist at the Monumental Theatre in Madrid (2016) and at the National Auditorium (2018) under the baton of Ramón Torrelledó and has also played at the Mar de Vigo Auditorium, the San Lorenzo del Escorial Auditorium Theatre and the Ateneo de Madrid. She has also participated in festivals, including the Young Performers of the Fundación Eutherpe-León, the MUSEG, the Festival of Segovia, and Valladolid’s “Maravillas Sonoras” series.

As a student of the School, she has been part of the Freixenet Symphony Orchestra conducted by Péter Eötvös and Pablo Heras-Casado, as well as that of the Fundación EDP Camerata under the baton of Paul Goodwin. In 2021 she participated in the 30th anniversary tour of the School with the Freixenet Symphony Orchestra, conducted by Andrés Orozco-Estrada, with whom she performed at Madrid's Teatro Real, at Bratislava's Reduta Hall, at Budapest's Liszt Ferenc Academy and at Vienna's Musikverein. She has been a member of the Debussy Duo, the Banco Activo Universal Esferas Ensemble under the guidance of Márta Gulyás, the Vivaldi Estaciones Ensemble and the Dvořák Quintet. She is currently a member of the Management Solutions Tchaikovsky Ensemble and the Appassionato Trio.

She plays a violin built by Yuri Pochekin, as well as a SIELAM baroque violin bow, loaned as an instrument scholarship by Fundación Albéniz.