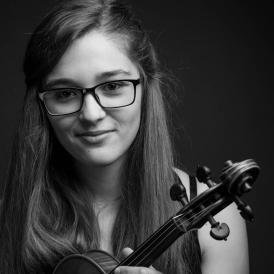 Born in Tui, Spain in 1999. From 2016 to 2021 she studied at the Reina Sofía School of Music’s Telefónica Violin Chair with professor Zakhar Bron.

She started her musical studies in her hometown before moving to Portugal in 2011, where she furthered her training at the Escola Profissional Artística do Vale do Ave (Artave) and the Escola Profissional de Música de Espinho. She has attended masterclasses by Gerardo Riveiro, Ani Schnarch, Agustín León Ara, Natalia Prishepenko, Christoph Poppen, Dora Schwarzberg, Miriam Fried, Christian Tetzlaff, Ingolf Turban, Silvia Marcovici, and Luis Fernando Pérez, among others.

She has collaborated with the Youth Symphony Orchestra of Galicia and as a student of the School, she has been part of the Freixenet Symphony Orchestra and the Viesgo Camerata. She has been conducted by maestros such as Slobodeniouk, Víctor Pablo Pérez, Andrés Orozco-Estrada, James Ross, Pablo González, Jaime Martín, Plácido Domingo, András Schiff, and Péter Eötvös. She has performed in venues including Casa da Música (Porto), Victoria Eugenia Theatre (San Sebastián), Opera Palace, auditoriums in Galicia, Reina Sofía Museum, Royal Theatre of Madrid, Koncertowa Orkiestry Zamosc (Poland), St. John Francis Regis Chapel (Regis University of Denver-Colorado), under the baton of Pedro Neves, Tadeusz Wicherek, and Hansjörg Schellenberger, among others.

As a student of the School, she has been a member of the Wanderer Ensemble. She is currently a member of the Asisa Óscar Esplá Quartet, under the guidance of Heime Müller, Quartet with whom she was awarded the Diploma of the most outstanding chamber group in the string quartet category by Her Majesty Queen Sofía in 2019, winning again such award in 2020, as well as the prize of the European Union of Music Competitions for Youth (EMCY) at the Spanish Competition of Young Musicians, in the chamber music category (2019).