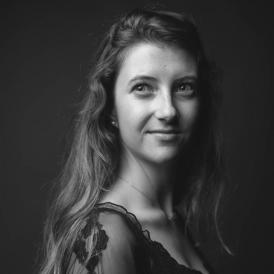 Born in Madrid (Spain) in 1996. Since 2017, she studies at the Reina Sofía School of Music’s Fundación Ramón Areces “Alfredo Kraus” Voice Chair with professor Ryland Davies. She has been granted a tuition scholarship by Consejería de Educación de la Comunidad de Madrid and Fundación Albéniz.

She studied Spanish guitar at the Madrid Royal Conservatory with Javier Somoza and lyrical singing with Elena Valdelomar. She received classes from Eduardo López Banzo at the 6th International Baroque Music Competition. She has attended the Magreet Honig Academy with Valerie Guillorit as well as the courses Music in Progress with Nan Maró Babakhanian and Claudio Forcada at the Oratory School of London and the Project “Canción Española” of Madrid’s Singing School. At the Reina Sofía School, she has received masterclasses from Ruggero Raimondi, Iris Vermillon and Leigh Melrose. She has also participated in works at the Canal Theatres, Teatro Real, National Auditorium, Fernando Fernán Gómez Theatre and the Rincón de la Rodríguez, along with soprano María Rodríguez.

She has been a member of the Madrid Youth Choir, conducted by Juan Pablo de Juan and Rennier Piñero and has taken part at the 20th Tallinn’s Europa Cantat with Tönu Kaljuste in the Europäisches Jugenchor festival of Basel.