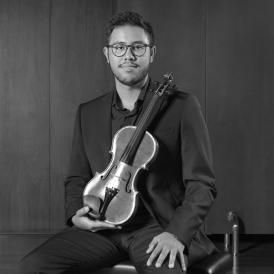 Born in Erfurt, Germany, in 1999. Since 2022, he studies at the Reina Sofia School of Music’s Telefónica Violin Chair with professor Christoph Poppen. He has been granted a scholarship by Fundación Albéniz.

He begun his studies in his native city and furthered them in Musikgymnasium Schloss Belvedere Weimar with professor Ursula Dehler, obtaining his degree in Music in the School of Music and Theatre in Munich under the guidance of professors Christoph Poppen and Lena Neudauer. He also studied in 2021-2022 in the Lübeck Conservatory with professor Heime Müller. Furthermore, he has attended masterclasses and courses by Ulrich Knörzer, Beate Hartmann, Liana Isakadze, Michael Dorner, Christian Sikorski, Ulf Tischbirek and Eckart Runge, among others.

In addition to being awarded first prizes at the state and federal “Jugend musiziert” competitions, he has been a laureate in several editions of the Erfurt Chamber Music Competition.

As soloist, he has performed as concertmaster with the Erfurt Philharmony Orchestra and with the Erfurt and Turingia State Youth Philharmonic Orchestra. He has also performed with the Belvedere Musikgymnasium Schloss Symphony, Munich Hochschulorchester and the Studentisches Orchester Baden-Württemberg. He also has wide experience in chamber music, participating in several quartets, trios and in the Lubos-Ensemble sextet.

As a student of the School, he is part of the Stoneshield Quartet.