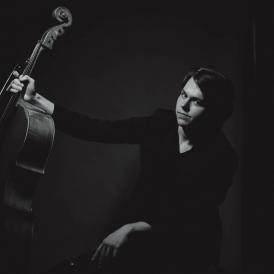 Born in Moscow (Russia) in 1994. Since 2018, he studies at the Reina Sofía School of Music’s Aline Foriel-Destezet Cello Chair with professor Jens Peter Maintz. He has been granted a scholarship by Fundación Albéniz.

He studied at Moscow’s Conservatory with professor Oksana Bystrova and later with Natalia Shakhovskaya and Boris Adrianov. He has attended masterclasses by Sergey Roldugin, Martti Rousy, Nils Ulner, and Wolfgang Emanuel Schmidt.

He has performed under the baton of conductors Alexander Sladkovskiy, Eduard Gratch, Theodore Curentzis, Gillian Galant, Rustem Abyazov and Alexey Vorontzov in Russia’s most renowned stages. In addition to recitals in countries including Spain, Denmark, South Korea, Georgia and Estonia, he has performed in the Avery Fisher Hall, of New York’s Vladimir Spivakov Charity Foundation.

He has also developed his artistic skills within management by promoting concert cycles, organising his own chamber group (Cello Cellisimo) and since 2017, collaborating with the Director of the Dmitriy Krymov theatre.

As a student of the School, he has attended masterclasses by Torleif Thedéen and Gautier Capuçon and has been a member of the Amadeus Ensemble.