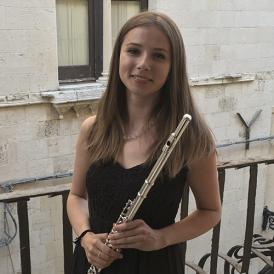 Born in Moscow, Russia, in 1997. She studied at the Central Music School of the Moscow Tchaikovsky Conservatory under the guidance of O. Khudyakov, at the Wells Cathedral School with a scholarship of the UK government, at the Guildhall School of Music of London with Philippa Davies and, between 2018 and 2021, at the Lyon National Conservatory for Music and Dance with Julien Beaudiment and Emmanuelle Raville. She is currently a student of Sophie Cherier and Vincent Lucas at the Paris National Conservatory of Music and Dance. She has also been awarded in several competitions in the UK such as British Flute Society Young Artist Competition, and in Belgium, Svirél, Bruxelles Grand Prix Virtuoso. In February 2020, she was selected to participate in the Jeunes Talents Festival in Paris. She is also a member of the Gustav Mahler Jugenorchester.