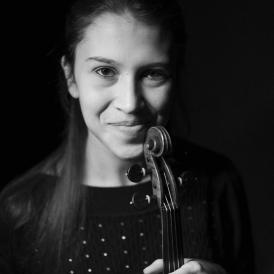 Born in Adrogué, Argentina, in 2000. Since 2019, she studies at the Reina Sofía School of Music’s Telefónica Violin Chair with professor Marco Rizzi. She has been granted scholarships by MAEC/AECID and Fundación Albéniz.

In 2012 she was selected to participate in the Suzuki Youth Orchestra in Minneapolis (USA) and was awarded third prize at the 21st Generation Competition in Buenos Aires. In 2018 she was awarded first prize at the Tilo Rajneri Performers of Classical Music Competition. In 2017 she completed her studies at the Orchestral Academy of Teatro Colón, where she participated in concerts as concertmaster and soloist, and she has attended masterclasses by international maestros, including Ingolf Turban, Christoph Poppen, Linus Roth, Ralf Gothóni (groups with piano), and Helena Poggio (string ensembles). She has also taken part in courses and activities such as the Zenon Brzewski International Music Course in Poland with Roman Lasocki and Konstanty Kulka; the International Music Encounters of the Menuhin Academy in Switzerland with Maxim Vengerov and Oleg Kaskiv, and the Schlossfestspiele Hohenpriessnitz Machern International Festival in Germany with Viktor Tetriakov and Natalia Likhopoi. She has been concertmaster of the Amadeus FM 104.9 Orchestra, among others, and has performed as soloist and chamber group in renowned venues of Buenos Aires, Córdoba, and Río Negro (Argentina).

As a student of the School, she has been a member of the Freixenet Symphony Orchestra, conducted by Pablo González and Pablo Heras-Casado, as well as that of the Sinfonietta with Johannes Kalitze, and the Fundación EDP Camerata under the baton of Giovanni Guzzo and Paul Goodwin. In 2021 she participated in the 30th anniversary tour of the School with the Freixenet Symphony Orchestra, conducted by Andrés Orozco-Estrada, with whom she performed at Madrid's Teatro Real, at Bratislava's Reduta Hall, at Budapest's Liszt Ferenc Academy and at Vienna's Musikverein. She has also been part of the Stoneshield Quartet and the Dvořák Quintet and is currently a member of the BBDO Contrapunto Quartet.