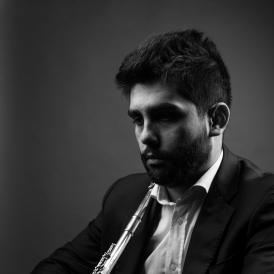 Born in Curitiba (Brazil) in 1994. Since 2016, he studies at the Reina Sofía School of Music’s Flute Chair with professor Jacques Zoon. He has been granted scholarships by Sylvia Nabuco and Fundación Albéniz.
He started his higher musical education in 2012 at the School of Music and Fine Arts in Paraná, under the guidance of maestro Giampiero Pilatti. He later furthered his training with Jessica Dalsant. He has attended masterclasses by Emannuel Pahud, Pirmin Grehl, Emily Beynon, Fenwick Smith, Carol Wincenc, Michel Belavance, Bulent Evcil, Nicole Esposito, and Jonathan Kelly, among others. He has participated in several national competitions, including Prelúdio and Pre-Estreia in TV Cultura. In 2015 he was awarded second prize and was selected as revelation at the 3rd Young Performers Competition of the Goiás Philharmonic Orchestra. He has performed in the Curitiba, Santa Catarina (FEMUSC) and SESC International Music Festivals, as well as within the cycle of Fundación Juan March and in that of Casa de la Moneda, both in Madrid. He has been flutist and piccoloist of the Parana Symphony Orchestra from 2013 to 2015, soloist of the Ponta Grossa Symphony Orchestra from 2011 to 2014 and soloist of the Wind Ensemble of Curitiba in 2016.
As a student of the School, he has been part of the Freixenet Symphony Orchestra, conducted by Andrés Orozco-Estrada, Víctor Pablo Pérez, Plácido Domingo, and András Schiff. He has also been a member of the Sinfonietta, under the baton of Johannes Kalitzke, Baldur Brönnimann, and Jorge Rotter, and that of the Harmonie Ensemble, the Orfeo Sextet and Quintet, and the Casa de la Moneda Scarlatti Quintet. He is currently part of the Cosan Ensemble and the Barroco Ensemble.