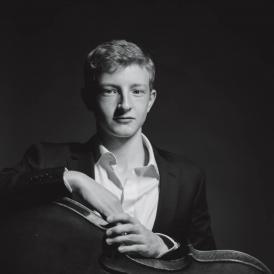 Born in Wells (United Kingdom) in 2002. Since 2018, he studies at the Reina Sofía School of Music’s Aline Foriel-Destezet Cello Chair with professor Ivan Monighetti. He has been granted scholarships by Lynne and David Weinberg and Fundación Albéniz. In the 2019-2020 academic year he received the Diploma to the most outstanding student of his chair.

He began his cello studies at the age of four. In 2009 he entered the Wells Cathedral School where he received classes from Elisabeth Anderson and in 2013, he was admitted into the Purcell School under the guidance of professor Alexander Boyarsky. Meanwhile, he furthered his training in chamber music at the children’s department of the Royal College of Music. In 2017 after being granted a scholarship by the Liechtenstein International Music Academy, he attended masterclasses by Wolfgang Emanuel Schmidt. As a student of the Reina Sofía School, he has also attended masterclasses by Torleif Thedéen, Alexander Lonquich, Asier Polo, Ralf Gothóni, Oliver Wille, and Alban Gerhardt, and has participated in a meeting with Gautier Capuçon.

He was a Raphael Sommer scholar and won the Purcell School’s Junior Concerto, as well as the Nancy Carr Memorial, Marjorie Humby, Gordon Turner, Barbara Boissard Concerto, and the Chamber Music competitons of the Royal College of Music, that gave him the chance to play at the Wigmore Hall in 2017.

He has performed in Pratovecchio, Poppi, Osimo, and Recanati in Italy, and in Somerset, Wiltshire and London in the United Kingdom, on stages such as the Charterhouse, Goldsmiths Hall, Buckingham Palace and Windsor Castle.

As a student of the Reina Sofía School, he has been part of the Freixenet Symphony Orchestra, conducted by Péter Eötvös, and has been soloist, with this orchestra, conducted by Jordi Francés. He has also performed with the Fundación EDP Camerata under the baton of Giovanni Guzzo. In 2021 he participated in the 30th anniversary tour of the School with the Freixenet Symphony Orchestra, conducted by Andrés Orozco-Estrada, with whom he performed at Madrid's Teatro Real, at Bratislava's Reduta Hall, at Budapest's Liszt Ferenc Academy and at Vienna's Musikverein.
He has also been a member of the Banco Activo Universal Esferas Ensemble, the Enagás Schumann Ensemble, the Schola Trio, and the Stoneshield Quartet. He is currently part of the Bain Satie Ensemble and the Ravel Duo.