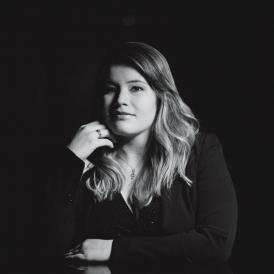 Born in Bogotá, Colombia, in 1994. Since 2018, she currently studies at the Reina Sofía School of Music’s Fundación Ramón Areces “Alfredo Kraus” Voice Chair, currently with professor Susan Bullock CBE, having received the Diploma to the most outstanding student of her chair in 2021. She has been granted scholarships by Fundación Santo Domingo and Fundación Albéniz.

She studied at the Central University of Colombia with Alejandro Roca and Camila Toro. She has received masterclasses from Teresa Berganza, Sarah Connolly, David B. Philip, John Graham Hall, Francisco Araiza, Adrian Thompson, and during the Santander Music and Academy Encounter, from Iris Vermillion.

She has been part of the opera workshop at the Central University where she played the role of Earth in “Los elementos” opera of Antonio de Literes; the Countess in “I due Figaro” of Saverio Mercadante; and the Public Opinion in “Orphée aux enfers” of Jacques Offenbach.

She was the main character in “El gato con botas” of Xabier Montsalvatge at the Teatro Colón of Bogotá. In 2017 she was awarded second prize in the youth category of the National Singing Competition of Colombia. In 2018 she participated as a student in the masterclasses of the Cartagena de Indias International Music Festival and performed as soloist “Aufstieg und Fall der Stadt Mahagonny” opera of Kurt Weill as one of Mahagonny’s wives in the coproduction of the Teatro Colón in Buenos Aires, Municipal de Santiago and Teatro Mayor Julio Mario Santo Domingo. She has recently performed at the closing concert of the 11th Autumn Music Festival at the Casa de las Flores and at the Palacio Real de La Granja de San Ildefonso, organised by Patrimonio Nacional.

As a student of the School, she has been soloist with the Sinfonietta under the baton of Johannes Kalitzke and has performed within the World Heritage Cities series in Toledo, as well as within the Fundación Banco Sabadell Young Talents series at Madrid's Teatro Real. She has been a member of the Fundación Orange Voces Tempo Ensemble.