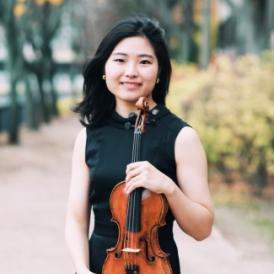 She was born in Kanagawa (Japan) in 1998. In 2015 she won the 1st Prize at 69th. Student Music Concours of Japan. In 2016 She performed as a soloist with Kanagawa Philharmonic Orchestra. She has also studied String Quartet at Suntory Chamber Music Academy. In 2016 she performed with Anne-Sophie Mutter and her Virtuosi at Suntory Hall. She had studied Tokyo University of the arts with professor Masafumi Hori and professor Tamai Natsumi. Since 2019 she is a student of professor Latica Honda-Rosenberg at the University of Arts in Berlin. Yuriko is funding as a scholarship student by the Agency for Cultural affairs of Japan.