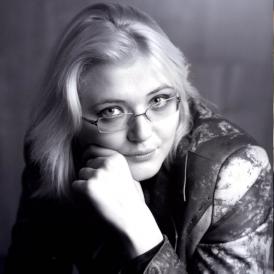 Artemyeva was born in Kieve, Ukraine in 1986. She studied at the Reina Sofía School of Music with Professor Dmitri Bashkirov in the Fundación Banco Santander Piano Chair. As a student, she took part in several recitals in Spain, Switzerland, Germany, Italy, and Russia. She also played as part of the Freixenet Orchestra of the School and with several symphony orchestras in Alicante and Palma de Majorca. She has been accompanying pianist professor at the Reina Sofía School of Music since 2008, originally in the Oboe Chair with Professor Hansjörg Schellenberger, and currently in the Telefónica Violin Chair with Professor Zakhar Bron since 2010. Likewise, since 2007 she is accompanying pianist at the Santander Encounter of Music and Academia and in 2008, she participated in the “Paloma O’Shea” Santander International Piano Competition.