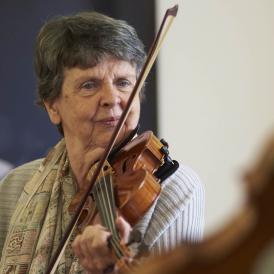 She was born in Padua (Italy) in 1945. Of Russian origins and of German-Argentinian nationality, she started to play violin at age 4 under the mentoring of her father, a disciple of Leopoldo Auer, and later continued her education with Ljerko Spiller in Buenos Aires. She then returned to Europe when she was 17 to continue her studies. She has been distinguished with the Gold Medal at the Carl Flesh Violin Competition in London and with the Silver Medal at the Queen Elisabeth Competition in Brussels. Her musical mentors during those years were Joseph Szigeti, Sandor Vegh and Yehudi Menuhin, among others. Besides taking part in many competitions as a participant, she is also invited regularly as a member of the Jury of the most important violin competitions, such as the Queen Elisabeth in Brussels and the Sibelius in Helsinki. In addition to her recital and soloist performances with the most important orchestras, she has dedicated a great deal of her time to chamber music, especially with the “Munich String Trio” of which she was a member for over twenty years, together with her husband, the viola Oscar Lysy, and cellist Walter Nothas. She currently is Head of the Violin Department at the Hochschule für Musik und Theater München, and since the 2010-2011 academic year, she is also Head of the Telefónica Violin Chair of the Reina Sofía School of Music.