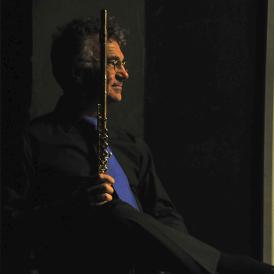 András Adorján was born in Budapest, grew up in Copenhagen and lives since 1974 in Munich. After obtaining a dentist diploma in Copenhagen in 1968 he completed his musical studies under the auspieces of Jean-Pierre Rampal and Aurèle Nicolet. As a laureate of international flute competitions and the principal flutist of important European symphony orchestras he was 1987 appointed professor for flute at the Musikhochschule in Cologne and continued 1996-2013 teaching at the Musikhochschule in Munich. 2018 Honorary Professor at the Schnittke-Institute in Moscow. With more than 100 recorded albums and as the editor of a unique and extensive encyclopedia Lexikon der Flöte published by Laaber Verlag 2009 he is today one of the best known and most prominent flutists of his generation. András Adorján received 1968 the Jacob-Gade-Preis in Copenhagen and was a laureate at the Concours International de Flûte in Montreux. 1971 he won the Premier Grand Prix at the Concours International de Flûte de Paris and was in 1988 honoured with the Prize of the Deutsche Schallplattenkritik, in 1996 with the Doppler-Ring of the Hungarian Flute Society and in 2007 by the Premio di carriera of the Italian Falaut-Associazione. He has received in 2018 the Lifetime Achievement Award of the American National Flute Association (NFA), in 2019 the Lifetime Achievement Award of the Chinese Flute Association (CFA) and in 2021 the Lifetime Achievement Award of the Croatian Flute Association (HDF)