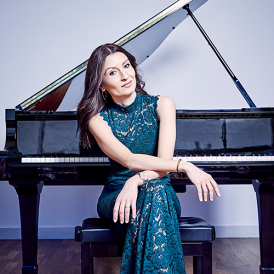 Anna Mirakyan was born in Yerevan. She began her piano studies at the age of 7 at the Tchaikovsky Special School of Music. From 1988-1995, she studied with Professor Lilit Markaryan and from 1995 - 2006 with Professor Rosa Tandilyan. During her studies, she participated in numerous concerts and recitals . At the age of 13, Anna won the Arno Babadjanyan and the Bach competition in Yerevan.
Later on, Anna Mirakyan entered the Komitas State Conservatory in Yerevan, where she graduated as a teacher, soloist, accompanist and chamber musician. In 2004, she joined the postgraduate course as a soloist and finished her studies in 2006.
In 1999, Anna played recitals and concerts in London. In 2001, she participated in the International Violin Competition “Hildegard Pabelich” and won a prize as “Best Accompanying Pianist”. In 2009 Anna performed in several chamber concerts at the Teatro Real.
Since 2012, she works as piano accompanist with Anna Chumacenco’s class at the Reina Sofía School of Music in Madrid as well as during international masterclasses. Besides her work as accompanist, Anna Mirakyan teaches piano at the Katarina Gurska Higher Education Center.
In 2017 she played Beethoven’s ten sonatas for violin and piano with Ana Chumachenco, Zohrab Tadevosyan and their students.
Since 2016 she regulary participates as a accompanist at the Nagold Sommermusik Academy (Germany), Youth Classic Academy (Switzerland),Internationale Musikakademie in Lichtenstein.
In addition, since the 2021-2022 academic year, she is accompanying pianist professor at the Reina Sofía School of Music’s Telefónica Violin Chair, together with professor Christoph Poppen.