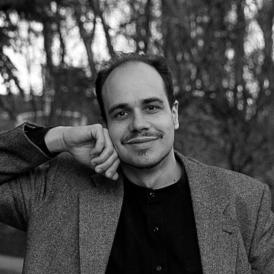 He was born in Bremen (Germany) in 1970. He started his piano studies at the Royal Conservatory in Madrid with Professors Amparo Fuster, Pedro Lerma and Joaquín Soriano, combining these studies with his activities as viola player of the JONDE, as well as violinist and harpsichord player of the Chamber Orchestra of the Deutsche Schule in Madrid. He completed his education at the Tchaikovsky Conservatory in Moscow, the Reina Sofía School of Music in Madrid, the Hochschule für Musik in Freiburg, the Fondazione per il Pianoforte in Como, and at the Peabody Conservatory in Baltimore. He mainly studied with Dmitri Bashkirov, Vitali Margulis and Leon Fleischer. He also actively participated in master classes by Murray Perahia, Alexis Weissenberg, Karl-Ulrich Schnabel, Fou Ts’ong, Dietrich Fischer-Dieskau, Mstislav Rostropovich and Ferenc Rados, among others.
He was finalist at the Santander International Piano Competition and was awarded first prizes at the following international competitions: Chimay Foundation (Belgium), Pilar Bayona (Zaragoza) and Dino Ciani (Milano). In 1992, he was handed in by Her Majesty Queen Sofía the Diploma to the most outstanding student of his chair.
As soloist, he has performed throughout Europe, the United States, Russia, Central America, Korea and Japan with orchestras such as Munich Philharmonic, Moscow Philharmonic, Teatro Alla Scala Philharmonic, Scottish Chamber Orchestra, Prague Philharmonic Radio Svizzera Italiana, Norddeutsche Rundfunk, and most of Spanish orchestras.
Martínez Mehner has been an assistant professor to Dmitri Bashkirov at the Reina Sofia School of Music in Madrid. Additionally, he has been piano teacher at the conservatories in Salamanca, Aragón and at the Katarina Gurska School. He is currently a professor at the Hochschule für Musik in Basel and Cologne, as well as associate professor at the Reina Sofía School of Music. He also teaches courses in Europe, Asia and United States.