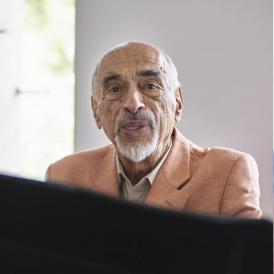 Dimitri Bashkirov was born in Tiflis, Georgia. He started his studies with his family in that city, continuing his education later with Anastasia Wirsaladze at the Tiflis Conservatory and with Alexander Goldenweiser at the Tchaikovsky Conservatory in Moscow. In 1955 he won the first prize at the Marguerite Long-Jacques Thibaud
Piano Competition, in Paris.

He has also appeared with conductors such as Vladimir Ashkenazy, Daniel
Barenboim, Kurt Masur, Zubin Mehta and Wolfgang Sawallisch, among others.

He has played chamber music with the violinist Igor Bezrodny and the cellist Mikhail Komnitzer. In 1957 he started his extensive teaching career at the Tchaikovsky Conservatory in Moscow and at the Conservatoire National Supérieur de Musique de Paris, the Mozarteum in Salzburg, the Sibelius Academy in Helsinki, and at the Encuentro de Música y Academia in Santander. He has published several studies in Sovetskaya Muzïka.
He is Professor of the Fundación Banco Santander Piano Chair at the Reina Sofía School of Music since its foundation in 1991. In June 2019 he received the Emeritus Professor Medal of the School from Her Majesty Queen Sofia.