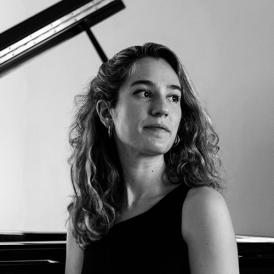 She combines her concert activity with her pedagogical work at Seville’s Manuel Castillo Conservatory’s Repertoire with Piano Chair. She has been awarded prizes in several competitions, including the Vicente Scaramuzza Prize, International Competition Ciutat de Carlet, International Competition Ciudad de El Ejido and Ciudad de Linares Marisa Montiel, among others. She has performed as soloist with the orchestras OSCYL, Sinfónica Goya, Filarmónica CSMA and CIM of San Lorenzo de El Escorial. She has also given recitals in series and festivals such as AIE Clásicos en Ruta, Finge Festival, Festival Pianomeeting, Festival Rafael Orozco and the Música en el Instante series. She studied a Master's Degree in Performance at the Reina Sofía School of Music with professor Galina Eguiazarova. She has worked as a repertoire pianist at the Castilla y León Music Conservatory and at the Katarina Gurska School in Madrid and as a piano teacher at the Monteverdi Professional Music Conservatory.