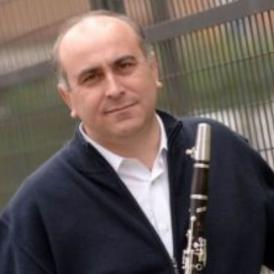 He was born in Carcagente (Spain) in 1961. Since 1985 is solo clarinet of the National Orchestra of Spain. He’s a soloist and professor specializing in teaching of the clarinet. He is often requested to give courses and master classes as a professor of the National Youth Orchestras of Spain, the Community of Madrid, Valencia, Cataluña National and as Jury of national and international competitions and orchestras and professional bands. Since 1988, is a part of duo of clarinet and piano with Aníbal Bañados. He was a founder and guest of various chamber groups as the Clarinet Quartet of the National Orchestra of Spain, Aubade Quintet, Camerata Concertante, Bellas Artes Quartet, Finale Group, Manuel de Falla Quartet, Vintage Quartet, Josep Talens Trio or the Matisse Ensemble, among others.

From 1995 to 2009 has been professor of clarinet at the Provincial Conservatory of Music of Guadalajara. Also, from 2007 to 2009 has been professor of orchestral repertoire for clarinet at the Conservatory of Music of Aragón. Since 2008, is Professor Assistant of the Clarinet Chair at the Escuela Superior de Música Reina Sofía in Madrid, with Head Professor Michel Arrignon.

He has played as solo clarinet in the symphony orchestras of Madrid (Arbós) Classical Madrid, Andrés Segovia, Villa de Madrid, Madrid Philharmonic and Reina Sofía. He has been professor with opposition exams in the Municipal Symphonic Band of Madrid between 1982 and 1985.

He has performed in recitals with piano and chamber groups in Spain, France, Belgium, Hungary, Portugal, Romania, England and Germany, among other countries. Also, he did some concerts with orchestras such as the National of
Spain, Villa de Madrid, Toulouse National Chamber, of the French Community of Belgium, Sinfonierorchester München Concert, Camerata XXI or the Bilbao Symphony Orchestra.

His discography consists, among other works, the "Works for clarinet and piano" by Miguel Yuste,"Clar i Net" volume 1 (2003) and volume 2 (2006), completing all the work for clarinet and piano by Julián Menéndez , both with pianist Aníbal Bañados, "Spanish Fantasy, op.17" by Julián Bautista with Sinfonierorchester, "Homenatge to Josep Talens" (2004), "Repertoire for 2 Clarinets and Piano" with Josep Fuster and Aníbal Bañados (1988) and soundtracks of films like "All About My Mother" by Pedro Almodóvar or "The Butterfly's Language" by José Luis Cuerda. He also has numerous recordings on National Radio and Spanish Television.