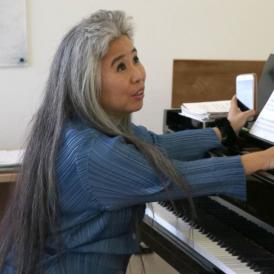 Eriko Takezawa was born in Hiroshima (Japan). She studied with Naoyuki Taneda and Wolfgang Manz in Germany.
In 1984 she was awarded first prize at the International Piano Competition in Ostuni (Italy) and many prizes as pianoduo. Besides solo and pianoduo repertory she is specialist in chamber music and has played in Europe, Japan, Korea, Taiwan, Indonesia, Israel, Egypt and at many festivals like Schleswig-Holstein Musik Festival, Lucerne-Musikfestival and Schwetzinger Festspiele, the three of them in Germany.
She is professor at the University of Music Karlsruhe (Germany), at Musikakademie Basel (Switzerland) and at Musikene in San Sebastián (Spain) and accompanies at many international competitions in Germany, Netherlands, France, Italy, Czech Republic and Poland.