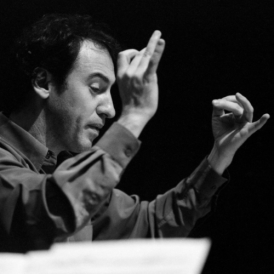 Fabián Panisello, Argentinian-Spanish composer and conductor, is internationally known on the contemporary music stage for the high quality of his work. In the words of Karlheinz Stockhausen: “full of ideas, intense and bursting with energy (…) I am very happy to see that the spirit of Webern continues to live in a changed world.”
Fabián Panisello is founder and artistic director of PluralEnsemble, recognized as one of the most outstanding ensembles for new music in Europe, with regular seasons with Fundación BBVA, national and international tours and CD recordings.
He is Professor of Composition at the Reina Sofía School of Music and guest professor at the China Conservatory in Beijing. Previously, he was Professor of Musical Analysis from 1996 to 2000 and then Academic Director at the Reina Sofía School of Music and at Madrid’s International Institute of Chamber Music from 1996 to 2013 and has been Director of these same institutions from 2014 to 2019. He is composer-in-residence and composition professor in masterclasses and festivals in Graz, Munich, New York, Buenos Aires, Davis (CA), Shanghai, Nanning, Beijing, Bogotá, Mexico, Leuk (Switzerland), Jerusalem, Tel Aviv, and Budapest, among others.
He was trained as a composer with Francisco Kröpfl and Julio Viera in Buenos Aires and with Bogus&#322;aw Schaeffer in the Mozarteum in Salzburg (Diploma of Excellence, 1993). He completed his studies with Elliott Carter, Franco Donatoni, Brian Ferneyhough, Luis de Pablo, and Péter Eötvös, among others, and he has been awarded prizes such as the Mozarts Erben of the city of Salzburg, the Würdigungspreis of the Ministry of Education, Science and Culture of Austria, and the Rodolfo Halffter Ibero-American Composition Prize. He is a member of Argentina’s National Academy of Fine Arts.
In recent years, he has been focusing specifically on dramaturgical works. His chamber opera “Le Malentendu” was premiered in 2016 to critical and public acclaim: “We surely find ourselves before the best premiere of new opera of the Royal Theatre in a long time” (Tomás Marco); “Panisello has a very special talent for the stage, creating an exciting theatre with magnificent music” (Péter Eötvös). Le Malentendu was coproduced between the Teatro Colón of Buenos Aires, Warsaw Autumn Festival, Neue Oper Wien and the Teatros del Canal and Teatro Real in Madrid. Also, his multimedia musical theatre “Les Rois Mages”, an international coproduction commissioned by the Ernst von Siemens Music Foundation through the CSIPM and the UAM Foundation, was premiered in January 2019 with great success from both audience and critics, and will tour in the 2019-2020 season in Nice, Tel Aviv, Munich, Vienna, and Klagenfurt, among others.
He has also received commissions from the National Orchestra of Spain, Donaueschinger Musiktage, Ensemble Modern, Goethe Institut, Orchestra of the Community of Madrid, BBVA Foundation, Italian Institute of Culture, Alte Oper of Frankfurt, Secretary of Culture of the Buenos Aires, and Festival Takefu of Japan, among others.
His work has been recognised and supported by Pierre Boulez, Luciano Berio, and Karlheinz Stockhausen, having collaborated in two world premieres of the latter with the orchestras of the Westdeutscher Rundfunk of Cologne and the Deutsches Symphonie-Orchester of Berlin; and his works have been performed by artists such as Pierre Boulez, Peter Eötvos, Susanna Mälkki, Leigh Melrose, Allison Bell, Marco Blaauw, and Francesco D’Orazio, and the BBC Symphony Orchestra, Deutsches Symphonie-Orchester of Berlin, Orchestra of the Mozarteum of Salzburg, the Spanish National Orchestra, and Shanghai Symphony Orchestra, Arditti Quartet and Ensemble Modern.
He participates in the main international festivals dedicated to contemporary music, such as Wien Modern, Munich Biennale, Présences, Ars Musica, Ultraschall, Aspekte, Manca or Klangspuren Schwaz. He has recently been invited as conductor and resident composer at the Sound Ways Festival of Saint Petersburg, the New Music Week Festival of Shanghai, the Festival Manca in Nice, the National Centre for Arts (CENART) of Mexico, the Master of the Fundación Baremboim-Said, the Bridges Festival of the Vienna Konzerthaus, the China-ASEAN Music Festival, and the International Summer Academy of the Mozarteum in Salzburg.
His discography includes recordings for NEOS, Col legno, Cypres, Verso or Columna Música, among others. His work is published by Peters Edition of Leipzig.