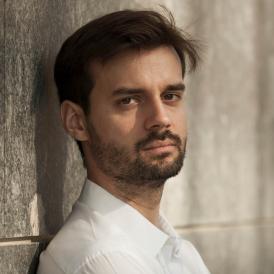 Madrid, 1987. Since 2017-2018, he is associate cello professor at the Reina Sofía School of Music’s class of professor Jens Peter Maintz. He began his musical studies with Arantza López and continued with Ángel Luis Quintana, Michal Dmochowski and Natalia Shakhovskaya at the Reina Sofía School of Music (2002-2009), where Her Majesty Queen Sofía handed him the Diploma to the most outstanding student of his chair during the academic year 2007-2008. He completed his training with Eberhard Feltz and Jens Peter Maintz at Universität der Künste in Berlin.
Fernando Arias is one of the most prominent cellists of his generation in the European music scene since he won the 2006 Concurso Permanente de Juventudes Musicales and the Primer Palau in Barcelona, among others. As a soloist, his recent and future engagements include performances of concertos by Vivaldi, Haydn, Beethoven (triple), Saint-Saëns, Schumann, Tchaikovsky, Shostakovich, Ibert or Gulda. Fernando is especially interested in chamber music and shares the stage with great artists such as David Kadouch, Seth Knopp, Peter Frankl, Donald Weilerstein, Antje Weithaas, Anthony Marwood, Roger Tapping, Karl Leister, Brett Dean or the Quiroga Quartet, and more frequently as a member of the VibrArt Trio with violinist Miguel Colom and pianist Juan Pérez Floristán. He often gives recitals in the most important concert halls in Spain and countries such as Germany, United States, Russia, Japan, France, Belgium, Netherlands, Portugal, Serbia, Tunisia and Mozambique. He has participated in festivals and cycles such as the Granada Festival, Vilabertrán Schubertiada, Nasher Sculpture Center Dallas or Philarmonie Berlin Lunch Konzert Series. In 2011 he released his recording with pianist Luis del Valle of the complete Brahms’ cello sonatas. His second CD along with VibrArt Trio is scheduled to be released at the end of the year.
He is usually invited to give cello and chamber music masterclasses in Spain and abroad. From 2012 to 2015 he was part of the teaching staff at Yellow Barn Festival (Vermont, United States), as a cello and chamber music professor. He joined the staff at the Aragón Music Conservatory at the age of 25 and in 2019 he obtained the position of Cello Professor at Madrid’s Royal Conservatory of Music.