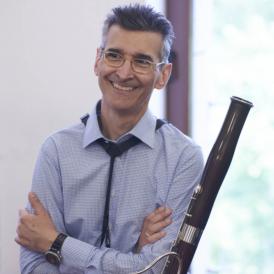 Born in Montevideo (Uruguay) in 1965, he comes from a family of musicians. He obtained his knowledge of solfège and violin at a very young age. From the age of 11 he began to devote himself to his true vocation: the bassoon, an instrument he learned from his father, a bassoonist in Venezuela. Soon after, he joined the now famous Simón Bolívar Orchestra of Caracas. Later, in 1981 he moved to London to study at the Royal College of Music with Kerry Camden and in 1984 he joined the prestigious class of Professor Klaus Thunemann at the Hochschule fur Musik und Theater in Hannover (Germany), where he graduated in 1988. During his studies, he was awarded the Prix Suisse at the International Music Competition in Geneva and first prize at the Carl Maria von Weber in Munich, both in 1987. In 1988, the year of his graduation, he became first bassoon in the Darmstadt Theatre Orchestra (Germany), and in 1989 he was appointed soloist of the Bamberg Symphony Orchestra, where he was based until 1995. He has recorded works for bassoon by Mozart, Vivaldi, Devienne, Villa-Lobos and Gubaidulina with the Concertgebouw Chamber Orchestra and the Academy of St. Martin in the Fields on different CDs which are available on Channel-Classics and Pentatone. He has been bassoon soloist with the Royal Concertgebouw Orchestra in Amsterdam since 1995, and since 1999, he has been professor at the Robert Schumann Music School in Düsseldorf. Additionally, since 2016, he is professor at the Reina Sofía School of Music’s Bassoon Chair.