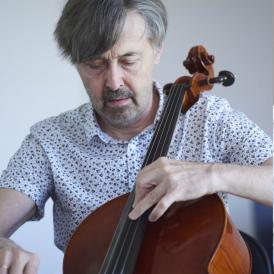 Born in 1948, Ivan Monighetti is a Russian cellist and conductor of Swiss descent. The last pupil of Mstislav Rostropovich at the Moscow Conservatory, he also worked with him at the Moscow Philharmonic Orchestra. He has performed as a soloist with the Berlin Philharmonic under Krzysztof Penderecki, who referred to Monighetti as an “extraordinary violoncellist”, the Leipzig Gewandhaus Orchestra with Kurt Masur, and the Gulbenkian Orchestra with Muhai Tang.
He has been awarded the first prize in many competitions, including the Tchaikovsky Competition in 1974 and, since then, his career has taken him throughout Europe, America and Japan. He has participated in many music festivals, such as the Ravinia Festival, Berliner Festwochen, Santa Fe, Schleswig Holstein, Argerich and Festival Sesión de Música.
His CD “Music of the 20th Century for Violoncello” was nominated to the Year’s Recording and to the Diapason d’Or. Monighetti has a very extensive repertoire, as a result of his work with contemporary composers Penderecki, Xenakis, Dutilleux, Knaifel, Schnittke, Gubaidulina, Silvestrov and Ali-Zadeh. Many of them composed works especially for him that are now part of the regular cello repertoire.
In 2003, he participated in the world premiere of Frangiz Ali-Zadeh’s Concerto for Violoncello. His CD “Six Suites for Violoncello solo” by J. S. Bach gained the Frederic Prize. He has appeared on the Swiss television in “Ritrato a Monighetti” and “Monighetti: Storie di famiglia” and has recorded for the Erato, Harmonia Mundi, Chant du Monde, Orfeo, Berlin Classics, Wego and DUX labels.
He has been member of the jury in prestigious competitions, such as the J. S. Bach in Leipzig. He also teaches master classes the world over and he frequently participates at the Santander Encounter of Music. He is currently professor at the Basilea Academy of Music (Switzerland), guest professor at the Moscow Conservatory, and head professor of the Aline Foriel-Destezet Cello Chair at the Reina Sofía School of Music in Madrid.